The Washington Post reports that during an October 2019 event at a Trump property, a hot mic video caught Matt Gaetz telling Roger Stone he'd likely be found guilty of the obstruction charges and other crimes he was facing, but assured Stone that “the Boss” would likely grant him clemency, even if he were convicted because "The Boss still has a very favorable view of you.” Gaetz then explained to Stone how he was working on getting him a pardon, but was hesitant to say more backstage at the event "Since there are many, many recording devices around right now, I do not feel in a position to speak freely about the work I've already done on that subject."

So, here we have a man charged with obstruction, witness tampering, fraud, and conspiracy, negotiating a presidential pardon from a guy serving on the House Judiciary Committee, who stands accused of child sex trafficking. I mean, who could possibly have an issue with that?

The thing is, it seems this band of “not so Goodfellas,” just can’t seem to keep their big mouths shut. That’s the thing with criminals - they just can’t seem to stop themselves from talking about their crimes. It's like going to the bar with your coworkers to try and relax - and someone’s inevitably going to bring up work.

Hell, Stone even told journalist Howard Fineman that Trump "knows I was under enormous pressure to turn on him. It would have eased my situation considerably, but I didn’t.” Oh really? Well, that makes things pretty clear - either Trump helps Roger Stone, or Stone starts singing like a canary. And, what do you know? Trump pardoned Stone on all of his seven felony convictions! Gee, who could’ve seen that coming?

Fact is, blabber-mouth Trump even praised Stone “publicly” for not “flipping” on him. Now, not to be judgmental, but if you’re thanking someone for “not flipping” on you, doesn’t that sort of imply there must have been something there to “flip?” You can call me “old-fashioned,” but I always thought a presidential pardon was supposed to be used to correct injustices, not to reward underlings for covering up your crimes.

Why, all this “the Boss will take care of things” talk, makes it sound just like they’re talking about a “mob boss,” not a sitting US President. These folks not only talk like mobsters, but they also act like mobsters. Gee, maybe they are mobsters? A guy in the construction business in New York, involved with the mob? Say it isn’t so! Frankly, it must be tough for Trump and his pals to try and figure out if they wanna be mobsters, fascists, or just plain assholes. Personally, I’d prefer to think of them as “inmates.” 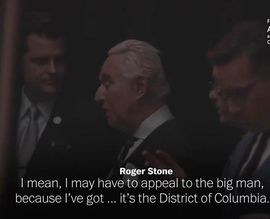 It's all right out of the 40's film noir, which makes me think was Ivana really alone or did she have help getting to the bottom of the stairs?