Prime Minister Viktor Orban, Hungary’s fascist leader who recently complained about Europeans having babies with people of other races, saying we don't want to create a "mixed-race world,” was invited to speak at the Conservative Political Action Conference (CPAC) in Dallas, where he delivered a stinging anti-LGBTQ attack on same-sex marriage and same-sex families, demanding same-sex couples must "leave our kids alone.” The anti-immigrant Orban then added that Ukrainian refugees coming across the borders from the northeast are fine, but people coming in from the south aren’t, because those people are coming from "other civilizations.” That speech was widely decried as right out of the “Nazi playbook,” even by one of his top aides - who immediately resigned.

Nevertheless, attendees say Prime Minister Orban’s speech was constantly interrupted by thunderous applause from the CPAC audience. Well sure! Hell, Hitler could have probably gotten a standing ovation at that conference. I mean, come on! There certainly isn’t a whole lot left to the imagination, when you’re inviting an international fascist leader to speak at your gathering. It isn’t like he’s gonna get up there and say something like “can’t we all just get along?”

I mean, about the only thing left now, is for Republicans to invite Russian President Vladimir Putin to address the 2024 Republican National Convention about the “failings of liberal democracy.” As if it isn’t bad enough that Republicans and their corporate masters continue sending good American jobs overseas, now it seems they’re even importing foreign “hate mongers” like Orban into the country - putting our own American hate monger jobs in jeopardy.

You know, sometimes I wonder why all these CPAC conservatives, who seem to love fascists like Viktor Orban so much, don’t just move to Hungry? I mean, isn’t it every MAGA half-wit’s dream to live in a “White Christian Nationalist’s Paradise of Racial Purity?” Then I remember that could never work with our MAGA crowd, because those goddamn Hungarians would never agree to change their official national language over to “English.” Why, the nerve of them, anyway! 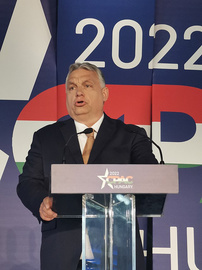 Interestingly Hungarians are actually required to start learning English in the third grade and anyone under 35 usually speaks English fluently.

I am far from a fan of Orban and agree wholeheartedly that he is a racist bigot. He put up a barbed wire fence and was able to stop the Syrians from entering Hungary a long time ago. Interestingly though, he inherited lots of gypsies which he has used to unite other Hungarians. Fazist dictators understand very well that everyone has to have an enemy in order to form a cohesive tribe.

Yeah, English would be the deal breaker.