Republicans such as Marjorie Taylor Greene, Lauren Boebert, Tucker Carlson, Matt Gaetz, and Vern Buchanan are expressing outrage over President Joe Biden’s student loan forgiveness plan, which cancels a portion of student loan debt for the country’s middle-class students. Meanwhile, many of these same Republicans received hundreds of thousands, with some even millions in PPP loans, which have been forgiven. Rep. Marjorie Taylor Greene had $183,504 forgiven, Matt Gaetz $476,000, Lauren Boebert $233,000, and Vern Buchanan had a whopping $2.3 million in government loans forgiven.

OK, so let’s see here - Vern Buchanan is worth over $70 million, and his three car dealerships had at least $2.3 million in PPP loans forgiven. Hmmm, now what was that again about paying back loans, Vern? Of course, I’m no math wizard, but it sure seems like Biden’s little $10K loan forgiveness thingy is kinda minuscule - next to your big, fat $2.3 million cash windfall. Just sayin’.

So, giving free money away to wealthy Republicans is perfectly fine, but loan forgiveness for middle-class kids buried in student loan debt - is nothing short of “highway robbery!” Gee, Vern - last time I checked, most middle-class students weren’t worth quite $70 million. Funny how Republicans always manage to feel “slighted” when asked to contribute to anything that might remotely be considered of some benefit to others.

That said, I do get what Buchanan and his Republican pals are concerned about here. It’s an extremely serious issue in most GOP circles - that being if we start giving these regular folks “affordable educations,” the next thing you know, they might just become smart enough to realize how stupid they’d be to “vote Republican.” Can’t have that!

Hell, they might even start to wonder why some poor, black guy like Eric Garner gets executed by police right out on the street for simply selling a few "loosie cigarettes,” while a prominent Republican like Rick Scott can steal $1.8 billion from Medicare - but instead of getting shot or going to jail, he gets elected Florida’s governor and then becomes a US Senator.

Why, if someone didn’t “know better,” they might think “the whole damn system is rigged.” Of course, if Republican lawmakers have their way, most young folks will never get to “know better.” That’s because Republicans have been extremely busy passing laws to make sure these uncomfortable little details about capitalist society - will never be taught in our schools. Problem solved! 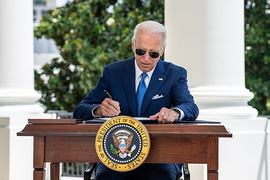