Stuck in a sheep jam in a village in Italy today. Is this still a thing where you live? 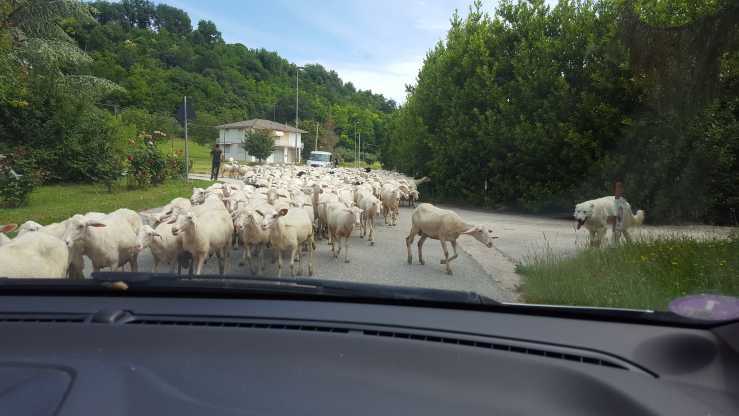 No, just duck jams and the occasional iguana.

It just brings us back to nature. Unless you are in a hurry.

I don't mind being stuck at all. It was the Sardinian shepherds who told me to plough through them, as they are only interested in a fast buck.

Around Wenatchee, WA, traffic is blocked by slow tractors.

I am so envious. I love adventure it has been so long since I have been. I that I think my anatomic adventurer is rusted solid.

@GoldenDoll I could use some loosening.

It can happen in downtown Nairobi, too! I've seen the Masai drive cattle through the main streets at ''rush hour''...because they CAN!

It happens. There are tons of farms around me. This has happened with chickens.

That must be am egg-ceptional sight....

@GoldenDoll they can get cocky.

It actually wasn't very beautiful. Many of the sheep were limping/had sores and wounds, and one of the magnificent Maremma sheepdogs actually had a broken leg but was still hopping along. Animal welfare has not necessarily reached this neck of the woods....

could be a lot worse. i see a cow in the road on occasion.

I tried some sheep jam once, but I kept getting hair caught between my teeth. I asked my friend who was trying some too how he liked it on his toast and he said it was baaaad.

It’s not hair it’s wool between your teeth...wool.

A ladylike guffaw to you, young man. X

If it was I wouldn't suffer from insomnia!

A fello insomniac. You poor thing. I’m old so I’ve given up struggling for natural sleep. Benzodiazepines for me. With a little chamomile tea.. we humans need to validate what we do. Especially if it’s unhealthy or unpopular. Until it gets to hair pulling stage . Then why fight it . I’m sure I’ve read somewhere happy people live longer....

@Seriousreason You read that correctly

In Australia we have the term "the long paddock" which is applied to the travelling stock routes. While stock is mainly transported by truck these days except to move from one paddock to another on the same property (sometimes this will involve crossing the road or going a short distance along it), the long paddock is mainly used in droughts when there is no feed for the stock on the farm and there are a few farmers who will take the stock out along the long paddock to get what feed they can.

Interesting. These guys did 10km in the heat.

@GoldenDoll As long as they aren't pushing them along too fast most likely easier on the sheep than being loaded in a truck and moved. As for the heat, if it wasn't above 30 celsius they wouldn't even notice. I've had stock get out of paddocks overnight and found them 6 km away the next morning for absolutely no good reason, plenty of feed and water, they just wanted to go for a wander.

This is doing it hard, minimum 6 miles a day, every day, for an eighteen month stretch. [aso.gov.au]

Nothing like that where I live but every now and then a fence goes down and cows or horses get out. Law enforcement locally will sometimes help you get them back because animals on the roadway are a hazard.
A few area of the US are still designated as "open range."

Oh I would love to get stuck there!

You'd be welcome. Someone to shout back at the shepherd when he got angry seeing a woman slowing down and not ploughing through them - "Ma che aspetti??!!??"

NO, though we do have the same with cows, twice a day when they move along roads from paddocks to milking sheds.

No, that's awesome! But we had a stampede of chickens today on Kauai, must have been 100 of them. Should have taken a photo or video, but I just stared in awe with my clients.

No, but we had an interesting jam here today. Since it made national news you may have heard that two firemen were shot while fighting a fire here in Long Beach this morning (25 June).

I woke up to sirens, sirens, and more sirens, for about 15 minutes, followed by helicopters overhead for well over an hour.

I can only imagine the impact on traffic that Captain Dave Rosa's funeral will have, with first responders from all over the state attending. Please do not take this as a complaint. IMHO firefighters are true heroes and deserve every bit of respect that we can show them.

I'd gladly sit through a sheep jam rather than lose a good man like Captain Rosa.

This may seem ignorant and naive but....why are people shooting at fireman.... ?? For the life of me I can’t see any merit. ...Policeman/ woman yes. It’s a dangerous unpredictable job but firemen.... fireperson..... sorry ladies.

You can include a link to this post in your posts and comments by including the text q:116089
Agnostic does not evaluate or guarantee the accuracy of any content. Read full disclaimer.