What made you an atheist/agnostic?

Hey! I have never used my account here, so I decided to make a question for a start. Consider me to be new.

Edit: Holy shit, I was not expecting such feedback. Thanks guys!

I went to a catholic private grammar school... and an all girl catholic high school...so, creative thinking skills kicked in in sophomore year... and it was over.... especially after a particularly disturbing sermon asking for more money by a priest that looked like a sow, and wore a toupee. My mom got her money's worth after all!! ??

@Bierbasstard Yeah... and unscathed by all the abuse. But then I was the ultimate nonconformist... so I was a predator's nightmare with my strong personality. Because t recently I watched The Keepers..... and now simply loathe ANY religion... because it's not only catholics that victimize children... and the weak... it's all religions. They look for products of parents that teach their children to never question church "teachings."

Spotlight is a good movie. I like Leah Remini's scientology series too.

Yeah, in 11th grade I renounced my belief in chrisr. The rest of my time there the friars referred to me as that pagan. Lol!

@Bierbasstard I'd hazard to say they'd be the second best coming in behind those who were educated but not indoctrinated from birth.

@Bierbasstard Jeez mate, you only got the 'pagan' bit, you mustn't have trying all that hard then...LOL.
I copped everything from Pagan to Heathen, Devil's Spawn, Heretic, Anti-Christ and heaps more besides BUT hey I got EXPELLED from every Sunday School my 'mother' forced to go to, plus every School Scripture Class as well and all because I asked questions they couldn't/ wouldn't answer.

Exactly. They introduced world religions and I had one question. What makes ours better than any of theirs? The answer? Faith. Yeah... Nope.

Shcool was something that I did for six hours a day. Nothing in my life outside of that was religious.

@Bierbasstard My family celebrates holidays and traditions. one ever shoved down my throat; I merely learned my parents following traditions... and i still love celebrating Easter, Xmas and.... that's it. lol We cook and drink... and catch up on life. the old folks go to . ?

Welcome. Join some groups and contribute.

Twelve years of catholic hypocrisy and much reading on other subjects.

@angelotzovanis There is a philosophy group and a critical thinking group.

Dharma cafe is nice.
Just search the groups section and you will find many interesting options.

Because no just god could allow the same question to be posted so frequently.
And, welcome, of course.

@angelotzovanis "Schellenberg argues that, since there are nonbelievers who are capable of a personal relationship with God and who do not resist it, there is no perfectly loving God,..."

Who says there are nonbelievers who are capable of a personal relationship with God? Who says they don't resist? goobly gook? If this is science I am going over to woo.

I was born as atheist

I was born this way

Me, too. I was not indoctrinated, either.

Because through out history, Religion has caused nothing but pain and suffering. 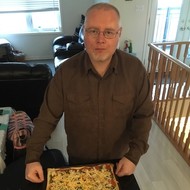 I was skeptical from the beginning, and the more and more i knew about universe, religion and bible the less i believed.

Two sets of encyclopedias we had in the house when I was growing up. I spent a lot of time reading through them. I'm pretty sure that sparked my critical thinking and curiosity about the world. The juxtaposition of that with my family's hard core Evangelical faith made it pretty clear for me.

I was adopted by my grandparents, one a southern baptist, the other a Mormon. I would try to go to vacation bible school, just for something to do as a kid, and they would get pissed off if it wasn’t their church. When I became a teenager I met my father, he was a Johova’s Witness like his father. My mother was always in and out of my life and her religion was like my grandmother’s, but more convenient. Well the only things they had in common was they loved to make fun of each other’s religion, they were each the only right one when it came to “knowing”, and they all had been married and divorced over and over. It’s the followers of religion that do it for me. The hypocrisy and righteousness, they can keep it, all of them.

To quote one of my heroes "Faith is the excuse used to justify a position when there isn't any evidence" (Matt Dillahunty). To be expected to believe in a sky daddy that will punish you forever for not believing in something for which there is no evidence at all is ludicrous.

Carlin in one of my favorite. He claimed he had as much authority as the pope, just not as many followers.

I was never baptized and never really made to go to church ( A couple times as a child but only because my grandparents were watching me and that’s where they were going ) but religion and specifically Christianity were always around me. My stepmother turned into a bible thumper soon after my brother was born. I was 14. My mother turned super religious while battling alcoholism in my late teens. Also, being a voracious reader, I had read the Bible in my early 20s, just to say I had read it. But in my late 20s I thought I was in Love with a hard-core born-again Christian. for three months I sincerely tried to believe the way she did. It didn’t work out needless to say. I realized how much shame and guilt and low self-esteem are a major part of believing in this stuff. And also the rejection of reason. Also the blind faith in utterly ridiculous notions. I went from agnostic to atheist in my early 30s.

Anyone know how to edit our posts? I just noticed mine is full of errors.

The three bars beside "reply" will give you that option

God, or dog, I forget. Welcome though.

A friend of mine told me his mother made him an atheist, and that if I gave her the wool she'd make me one too.

I use to think there was something not any specific god but just something.I tried to debate my friend and couldn't really come up with anything that could "beat" him so i did more research (alot) and found people such as Richard Dawkins and it completely changed my mind and made me realize how messed up religion is so I became an atheist. That is pretty much it

I'd say that my Dad teaching me to think and reason things out, question what I was told, research what I was told and the weigh up the results BEFORE making up my own mind pointed me in the right direction , that being towards Atheism and away from the Blind Faith world of religions.

I got my first college degree from a Lutheran college where I took 5 of the religion classes. I also taught a couple of the adult bible study classes at the last church I was a member of. It took my third time of reading that book from beginning to end to start my questioning and additional reading. So, all of those things ended my belief in the many "gods" that are described in that book.

realizing there were no gods. it's as simple as that.

The need for Christians to have a label for me created a term for me.
Nothing made me an athiest but as there is no god I have been labeled as such for those who believe in magic creatures in the sky.

I was never a believer.
I was fortunate enough to have not been brought up in a religious household.

My parents and grandparents were secular, so I just never learned it

Reading the bible and other religious writings. Even a small amount of logic meant I became an atheist.

In junior , we were treated to an inspirational guest lecture almost every week. They were not supposed to be religion, but most of the time they were give by preachers.
On day, a perfect slob came and spent an hour telling us what a great preacher he was.
This guy was fat, dirty and unkempt. His shirt was too small so it was unbuttoned at the throat, yet he was wearing a dirty, gravy stained tie. His grammar was as bad as appearance.
One story he told was how he had picked up a hitch hiking solder ( this was during WW2) and, upon on finding out the guy was not saved, had baptized him in a roadside mud puddle.
M conclusion at the end of the lecture was " their is no god. If there was, he would not have let this guy be his representative.
I had never given it much thought up to this time.

You can include a link to this post in your posts and comments by including the text q:287631
Agnostic does not evaluate or guarantee the accuracy of any content. Read full disclaimer.