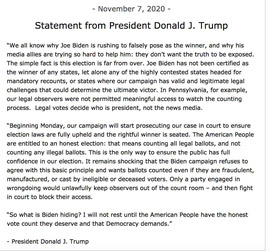 Just like Hitler within April 1944 in his bunker ordering his ghost army to defend him and the National Socialist Party leaders as he was enabling the wholesale destruction of Germany!!!

The coward Hitler hid behind the people of his Nazi death cult which he orchestrated the deaths of over 40 million innocent political and non political individuals so he could size power over everyone!!!

We al know how that turned out!!!

Now 75 years later we are repeating this death cult spiral!!! 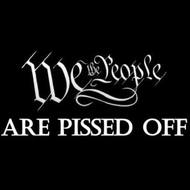 He'll sound as confident and validated two years from now, he'll be crying foul to his last breath even if he wins the 2024 election.
This is why Republicans project emotional instability and childish grievance on their enemies, it all comes from within them, they only describe themselves, but only those of us who saw Trump for what it was would have believed that in 2015.

Every word is a lie, this monster is going to leave the White House in January, and there is nothing his people can do about it. All of his court challenges have been knocked down for the bullshit that they are. It will be ugly, but he will be going away.

Liar, Liar, pants on fire! Nose as long as a telephone wire!