QAnon Trump supporters by the hundreds are pushing a bogus conspiracy theory all over the internet, claiming that the Nashville suicide bombing was actually a Chinese military operation, designed to steal the US presidential election. QAnon further explains that the explosion was actually a missile strike, aimed at destroying Dominion voting machines, which were allegedly being audited at the AT&T facility.

Now admittedly, my first reaction was “oh, come on! Why the hell would the Chinese ever wanna launch a missile attack on Nashville? Then it occurred to me, the CCP's dislike of country music is well known. Why, I’ll bet not one member of the CCP politburo has a single Hank Williams tune on any of their playlists.

So, why the hell pick on Nashville? Well, why not? Guess bombing Nashville makes about as much sense as anything else coming out of QAnon. And, if I’m understanding the plot correctly, the missile’s guidance system - was actually designed by Hugo Chavez, financed by George Soros, and may finally signal - the triumphant return of Elvis Presley.

But, all of that aside, at least we now know exactly for whom all those warnings about “don’t eat Tide Pods” were intended. Personally, I think it’s probably time we all stop asking each other about “just how stupid can these QAnon people actually get” - because it appears they're starting to take it as a challenge. 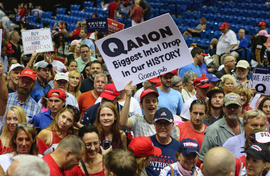 Oh my God! You really outdid yourself this time! Couldn't stop laughing!

Why, thank you so much!

Oh Please!
Chinese?
We all know it it actually part of the insidious plot of the "New Berlin" republic who have been covertly manipulating the world since the end of WWII, when the escaping Nazis Sonnenkinder went to ground in their underground tunnels at the south pole along with all their captured alien "Grey" technology!
They've had three generations of eugenic super people to prepare for this takeover.
The Chinese, huh do me a favour. 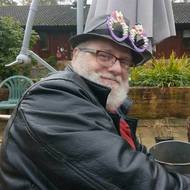 How many QAnon people are doing it as a joke? Remember Pat Paulsen?

I think Trump ran for office as a joke too. Remember him?