Florida’s Republican Governor Ron DeSantis on Friday announced he will order flags across the state to be lowered, to honor controversial talk show host and Trump’s Medal of Freedom honoree Rush Limbaugh - whom DeSantis described as an “absolute legend.”

Wow, that’s quite the honor! Having all of Florida’s dittoheads, lowering their Confederate and Nazi flags to half-mast - all in your honor? And, they won’t really need to “lower” them all that far, because when you’re honoring a weasel like Rush, you’ve already gone about as low as you can possibly go anyway.

Of course, some folks are always gonna argue that “Florida is much better than this.” Well, the simple answer is - “no it’s not!” In fact, Florida is the kind of place where many of us were surprised that Governor DeSantis didn’t order flags at half-staff - when Jeffrey Epstein died.

Besides, I think I’ve got a much better idea than all this flag-lowering stuff anyway! How about we arrange one of those old-fashioned political compromises here and, in lieu of lowering flags - everyone instead lower their pants to half-mast, just as Rush’s funeral procession passes by. Now, that’s what I call - a fitting send-off! 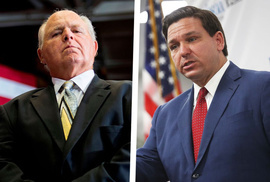 Everybody mooning Rush on his way to the grave is a fitting send-off...

DeSantis is a White supremacist just like Rush, so this is not an unexpected act by the Floriduh Governor.

Thank you. I appreciate your support.