We rely on members to let us know when posts contain content that violiate the community guidelines. The most common reason that content gets flagged is that it contains dehumanizing or trolling/baiting text. Getting too many flagged posts will result in account termination.
Visit Group Join Group
8 7

OK, now if I understand DeJoy's plan correctly, he wants to jack-up the price of mail delivery and slow down service. Humm, lower service, and higher prices? Now, that’s what I call some cutting-edge business theory!  Hell, with a game plan like that, if he ever left Post Office - I’m thinking he’d be the perfect guy to run the Texas electrical grid. I mean, at this point, we may as well bring back The Pony Express.

So apparently, I guess it turns out that simply donating money to Donald Trump's political campaign, doesn’t automatically qualify you to run a huge, complicated national organization after all. I mean, who knew? In fact, the truth is that Donald Trump’s and Louis DeJoy’s business expertise, have managed to turn this once-proud Postal Service - into a DeJoke.

Hey, I got an idea, let’s pass a law that says DeJoy’s paycheck can only be sent to him through that same mail service he’s trying to sabotage. Let’s see how he likes them apples. Perhaps it’s time that this Louis DeJoy character gets stamped “Return to Sender” and gets sent back to wherever the hell he came from, before everyone waiting for their overdue mail delivery - gets fed up and goes “Postal.” 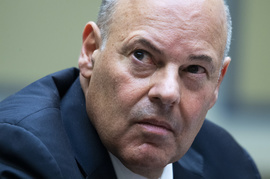 As The Pony Express was privately owned & went bankrupt after one year, we might not want to follow that model. Plus the USPS is Constitutionally mandated so its not going anywhere soon, but in what form. 1st Congress permitted the United Parcel to take package business away. Then there was "Simplified mailing" which was cheaper for businesses, but cost more in overtime for the USPS. Then Express mail was opened up to private companies to peel more layers of revenue for the USPS. Now the pension retirement system is required to pre-fund itself. Something no other service is required to do. Until we have Star Trek's ability to transport or the Constitution is amended, there will be something left of the shambles CONGRESS is responsible for. While they are in session....nobody is safe.

His agenda, I believe, is to OWN the service, and milk it for all he can.

The Republican thieves want the Postal Servce to fail so they can grab up all the prime postal real estate in every city and town.

It is NOT a business, it is a Service.

Does anyone want to hold him down while i tattoo the meaning of"Public Servant" on his forehead, backwards? (So he can read it everytime he looks in the mirror).

This POS needs to staked to a fire ant pile then hung out to dry..