Florida Republican Rep. Matt Gaetz, a fierce Donald Trump supporter and frequent QAnon apologist, about whom we learn has been under investigation for months by the Justice Department for allegedly having sex with a 17-year-old girl and funding her underage travel, is now claiming that two men approached his father with a proposal asking for millions to free an Iranian hostage which, if successful, would make Gaetz a national hero and also help alleviate his statutory rape legal woes. Gaetz says he took this as extortion - and contacted the FBI.

Gee whiz, and to think that all this time we were being told by “Q” that it was the Democrats, Hillary Clinton, and Hollywood celebrities who were running that “Pizzagate” child sex trafficking operation? Hey Mr. Q, I think we’ve found your child molesters. They’re apparently down in Florida - at the Gaetz residence.

Now, in all fairness, Rep. Gaetz is claiming that he didn’t actually have a “relationship” with the 17-year-old girl - it was merely a “business transaction.” And, to bolster his defense, former Alabama Supreme Court Chief Justice Roy Moore has promised Gaetz he’ll testify as a character witness - just as soon as he gets back from the mall.

In fact, some Republicans have gone so far as to argue that despite his sexual proclivities, we still need folks like Matt Gaetz around, to keep our economy going strong - pointing out that guys like Matt Gaetz may be responsible for as much as 40% of Motel 6’s revenue during the pandemic.

Well, all I can say is, Gaetz better hope that argument works in court, otherwise, I’m sensing a “White Ford Bronco” moment may soon be in Mr. Gaetz’s future. 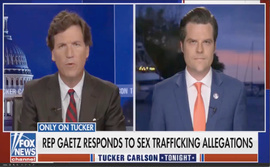 I spit coffee watching this as the Senator dragged up 20-year-old accusations against Fucker C, noting that "we have both been in this position".....Fucker's face was Priceless!

And, the investigation against him started with Barr's approval, thus no democratic plot.

It's even more convoluted that just that...