It amazes me that hunters, with no formal training are required to identify a bird flying at up to 50 mph and can be fined $ thousands for a mistake, Yet LEOs can't identify a taser at 2 feet and claim it to be a legitimate error in judgment 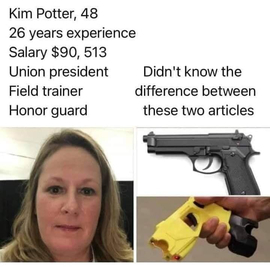 If this guy had cooperated with police he’d still be alive. The fact that he failed to cooperate means I have no sympathy for him despite the cops mistake.

Of course you are correct but this site is contaminated with anti law enforcement liberal idiots ,but let’s see how fast these arm chair quarterback punks would call the police if their pathetic lives were in danger.LOL

Trajan61 Yes .Your first sentence says it all .

Both the Victim and the Cop contributed to this tragedy.Another case in which an individual failed to comply with orders of law enforcement and in doing so provoked an incompetent cop to shoot him .

While both may have contibuted, the cop contibuted the most and was the one responsible for the death. This was her second Kill of a black man. She probably resigned since she had limited out on black men.

Professionals should be held to a higher standard than average citizens. The individual was in fear for his life, as he should have been based on the outcome.

@glennlab Tell me how the hell could the cop have contributed the most when the altercation was initiated by the perpetrator who tried to flee when he was being placed in handcuffs .He would be alive if he complied .

@bebe12 1. there is no guarantee that he would be alive no matter what he did. 2. There is considerable difference as to whether this was even a legitimate stop. There are conflicting stories as to why he was pulled over none of which justify the use of deadly force. 3. Police have the responsibility to protect and serve. neither was done in this obvious revenue stop. 4. This was her second black man killed in the line of duty. 5. She had 6 more years police experience than he had years on this earth. 6. She was a training officer and should be able to tell the difference between a taser and a glock blindfolded, and don't go with the heat of the moment, that won't wash.

@bebe12 "Tell me how the hell could the cop have contributed the most"
Are you insane? SHE FUCKING SHOT HIM!
How the hell does anyone contribute to someone else shooting them, other than by shooting first, if you cannot see that your as fucking dumb as she was, and as dumb as anyone who believes her damnable excuse that she drew the wrong weapon.

@bebe12 That's the most ridiculous thing I ever heard. So death is the penalty for resisting arrest? I thought cops were only supposed to shoot when they or someone else was in danger.

As far as I can tell from what I have read about this woman, she certainly should have known the difference between her gun and her Tayser. Perhaps in the moment, when everything was all crazy she did not think and just reached for one of her weapons. I am having a difficult time believing her story that’s for sure.

Also, back in 2019 after a deadly shooting she told the other cops to turn off their cameras - that story was verified by snopes.

Then she is corrupt, a disgrace to the uniform and a murderer.

Another thing that should be considered.

Neither she nor her trainee could physically control him.

She was under a lot of stress, pulled out the wrong weapon, and killed him.

I played high school basketball with two guys who went on to become police officers.

Either one of those guys could have easily pulled Duante Wright out of that car with 1 hand and restrained him.

Police departments need to consider which officers are out there making arrests in potentially violent situations.

Do US cop no long carry night sticks?
One crack across the knuckles or the knees with one of those and that punk was not going anywhere.
why not just cuff him to the steering wheel of the car and take his keys? Problem solved.
Why go for a gun or a Taser first? Because they wanted an excuse to hurt or kill him, there is no other possible reason when so many other options were open to them.
I have seen in our local high street a PCSO in the UK take down a thug armed with a knife, twice her size and hold him on the ground in a wristlock with her knee in his back until her colleague could cuff him and he was blubbering like a baby.
PCSO's are not even actual police they are part time volunteer "Police community support officer", but they are trained in restraint technique and self defence same as the regular police.
None of this "Duante Wright and Adam Toledo" shit makes any sense, unless US police training and psychological assessment is frankly garbage and you are allowing trigger happy psychopaths to police you.

@LenHazell53 I think we are making the similar points, the police that killed Duante Wright were not prepared for a physical confrontation. They didn't have to be 6'4+ or 220 pounds plus to subdue him. With respect to Adam Toledo, it was 2:30 in the morning, they chased down a kid with a gun in his hand, told him to drop the weapon, and raise his hands, but he started to raise his hands (with the gun) before he dropped it. They had every reason to fear for their lives. To claim otherwise is complete propaganda by the news media.

@BD66 I have seen the police body cam tapes and the cctv footage, he dropped the gun before he stopped running, his empty hands were raised when he was shot, I don't know what footage you were looking at.

So what did happen? Did she kill her victim to resign? Or is she dumb as a plug? She was conducting training and decided she needed a victim to demonstrate her balls?

By resigning, she can avoid being fired and losing her pension.

@Beowulfsfriend Perhaps she thought that by killing one of THEM, that would provide an excuse to resign. I'd say they should refuse her resignation and fire her anyway.

From everything I've been reading, including from a guy who was a cop, they are trained hard core that their gun goes on the side of their dominant hand and the taser goes on the other side, so a mistake like that would be near impossible. 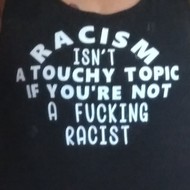 Did they drug and alcohol test her? That’s a big mistake!

Yeah, I totally swallowed her story ( puked on it right away!)