New data show that the largest group of anti-vaxxers are actually white, politically far-right, evangelical Christians, who now account for one-fourth of the US population. So, when CNN asked Pastor Tony Spell of the Life Tabernacle Church in Louisiana, why is he telling his congregation not to get vaccinated, he said it was because he’d rather die free, than live life on his knees. Pastor Spell went on to assure the reporter that he’s not a politician - he’s a “prophet.”

Now, I can’t say for sure whether or not Pastor Spell is actually a “prophet,” but I can testify to the fact that he sure appears to be making quite a handsome “profit.” And, a great big, fat “tax-free profit” at that! In fact, word has it most of his sermons begin something like this “Now, let us prey - on the half-witted morons who are actually dumb enough to attend church services here.”

I mean, instead of advocating for “herd immunity, what Pastor Spell is really promoting here is more like “herd stupidity.” That said, I’ve still gotta hand it to him though, unlike other infamous cultists like Jim Jones, this dude doesn’t even need to buy any grape Kool-Aid - to kill off his followers.

Now, what I don’t get is, if these religious fanatics think they don't need masks or vaccinations because “God's gonna protect them,” then why the hell do they always feel like they need to be armed to the teeth, just to pick up a quart of milk over at the market? Do they think they can just shoot the virus?

Anyway, so Pastor Spell says he’d rather “die free than live life on his knees by getting a COVID shot” - and frankly, I’m fine with that. So, I guess about the only thing we can do now, is simply wait for the follow-up story. You know, the one about how Pastor Spell is desperately trying his best to deliver his sermons - from a ventilator. 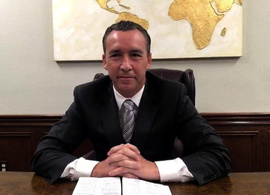 Humm a grifter's grifter in a button down shirt proclaiming his intimacy with a "God" that is the giver of ever lasting life. And what does his "God" tell him in the privacy of their boudoir? "If your flock of delusional believers give you enough money, (credit cards accepted), tell them that I will stand before them like the Magical Shield of Zelda and protect them from illness", And so it came to pass that pastor Tony luxuriated in his golden returns as those who gave to hear the word of "God" feared not and went forth and spread the virus among the nonbelievers. Can we get an amen and $10 or $20 dollar pledge?

The stupid burns bright in this guy and his followers!

Give that man, & his congregation, a Darwin Award! They deserve it!

Given the tendency to promote super-spreader behavior and events, and the eschewing of protective measures, this will be an interesting experiment. Is there any chance that money could be allocated to collect data and statistics? That could be valuable information!