MAGA Sen. Ron Johnson (R-WI) is certainly no stranger to controversy, claiming the Jan 6th rioters were actually “provocateurs” impersonating Trump supporters, then bragged he wasn’t concerned for his safety on Jan 6th, because the mob was comprised of “people that loved this country,” and not “Black Lives Matter” people. Then, in February, he declared that Wisconsin already had enough jobs and therefore shouldn’t make a pitch to manufacture new postal vehicles, which would’ve created 1,000 new jobs. Now, the MAGA senator is attacking both Medicare and Social Security benefits and their recipients, labeling those programs “reckless spending” and voting against a $35 cap on insulin, then suggesting “senior citizens need to go back to work.”

Wait a minute! The guy who celebrated the 4th of July in Moscow with Vladimir Putin a few years ago - said what? Now, is it just me, or could it be that Sen. Johnson is waving his teeny weeny “Johnson” at America’s middle class again? Not that MAGA voters even care that Johnson hasn’t ever done one single thing that has actually helped Wisconsinites or Americans. After all, let’s not forget that the basic foundation of today’s Republican Party is promoting “resentment,” not trying to actually accomplish anything.

The fact is, Republicans have been trying to gut our safety nets like Medicare and Social Security for ages now. Makes you wonder just what “safety net” they’ll target next? My guess is “traffic lights and stop signs.” Why, some folks actually believe Johnson may be the devil himself. Now, come on, let’s be serious! While the devil usually appreciates Johnson’s efforts on his behalf, it seems after all the shit Johnson’s been pulling - word has it Satan’s now totally embarrassed to be seen with him publicly. I guess that means there’s no point in even telling Johnson to “go to hell” anymore! They wouldn’t let him in. 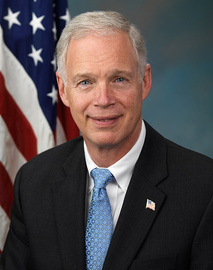 I just love how MAGAts like Johnson scream about S.S/Medicare/caide..
knowing they'll be getting tax payer supported healthcare and hefty retirement checks..hopefully all the Rethuglican johnsons will be stripped of all those "Socialist" amenities when they're convicted of Sedition.

How people like this dickhead keep getting elected is a fucking mystery to me!

Just goes to show you that most cheeseheads actually have cheese for heads sincethey voted for this shit monster twice over Russ Feingold.