We rely on members to let us know when posts contain content that violiate the community guidelines. The most common reason that content gets flagged is that it contains dehumanizing or trolling/baiting text. Getting too many flagged posts will result in account termination.
8 12

The Dems need to read this. 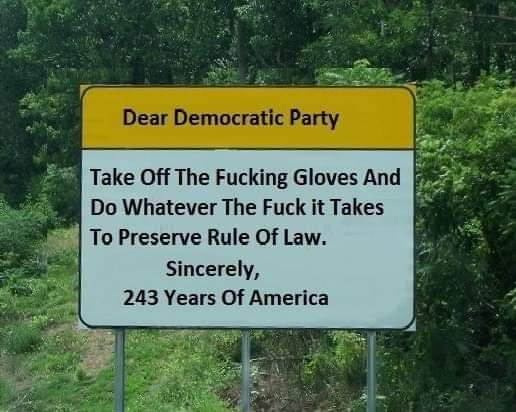 Couldnt agree with this more......

The problem is that when the Dems read it, Pelosi will say we need more time to review the pros and cons and the rest of the party will split into factions, each pontificating about whether the statement makes sense, and if so, how we decide what "whatever the fuck it takes" entails. As a whole, the Democratic party excels at self-righteous dithering and posturing but little else. Meanwhile, the Rethuglican bullies stomp all over them, us, and whatever shreds of decency the country could once claim as its own.

Wow, pretty good. Admire the people who were creative and did this.

The Dems are becoming the party of sophistication.

Trump may seem illiterate and borderline crazy...but he's crazy like a fox. He's clever enough to make sure he's using all the ways to skirt the issues...all the ways to avoid confrontation with "the law"....including getting the heads of law on his side.

So I'm sensing, as jerry99 seems to be doing as well....that the Dems in power know they're wasting their time and efforts to go against the Republicans now.

It will take a massive sea-change in 2020 to bring back the sanity, the science, and the ecology of sophisticated rule.

Doing Nothing will lead to them Losing and allow Drump to continue his loathsome behavior..So No More handwringing..

My sense is that there isn't much popular support for impeachment outside of the liberal side of the Dem party. This in spite of a general agreement that Trump has committed many criminal acts deserving of punishment and that a number of the people following his orders are already in prison. I just can't figure out what else he needs to do before people start to demand his impeachment???

Oh..you mean Exactly like when they started the Nixon Impeachment hearings?
Another Rethuglican prez that wasn't a Crook..

@Charlene Difference then was that Dems were mostly united and a few Repubs were willing to stand up to Nixon.

@Charlene We're not getting anywhere without some Repub support. You saw what happened when Justin Amash tried to do the right thing -- he was driven out of the party.

@jerry99 so lacking a spine and balls is a good thing?..Just because the R ethugs won't vote for it? I really hope every spineless "Moderate" Center/Right Dem gets tossed to the gutter in 2020..Starting with Pelosi and Shummer..

Biden and Warren have both finally stopped pussy footing around and have called him out. But that is just the beginning.

Biden only took off the gloves when his family was attacked..Warren likes using her steel fist in a velvet glove..