Tomorrow morning at 7.30 I will be on a plane, taking me to New York. My very first time there. I hope to see all the places I have see in movies and red about.

I've wanted to go there for years. Maybe I'll make it this year.

Congratulations... summer is the time to visit the only city in the world I never felt comfortable with and been there a lot since childhood spending the summers there. And I had been in haifa were no jew will think I am Puertorrican so is not that I haven't been around the world. If you can visit do not forget Ground Zero. Watch a baseball game, Central Park, Art Museums like Gugenheim, Broadway, Soho, Village, Time Square, use subway, the Liberty Statue... Do a little dance... live the city up! It is your time with the Big Apple! And say hi for me to my Mom in Manhattan.

I was just there a couple months ago for the first time. I rented the citi bikes, rode all over Manhattan, good time.

New York City is a lot of fun, but it's expensive. Hope you're bringing lots of cash.

If you're planning on catching a show, hit the red ticket booth on Times Square. You probably won't get tickets to the hottest show in town right now, but you'll be able to get in to a show for half price.

Least expensive way to see the Statue of Liberty is via the Staten Island Ferry. It's free of charge. The tour is not.

For less pricey accomodarions, don't stay in Manhattan. There's a nice B&B on Staten Island called the Harbour House. Lots less money and a great view of the skyline.

Ferry boats are so cheap, they're almost like free boat tours, and fun to ride. The night cruises are especially breathtaking.

You may want to check out the subway maps and schedules .

Ps. Don't forget to drink lots of water. It's supposed to be rather warm here- about 30 C. 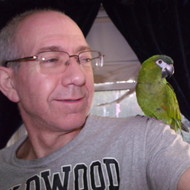 I live about 150 km west of New York and have been there many times (had an aunt who lived there) and there is just so much to see and do. To do just the main spots you need about a month. The weather for the next 2 weeks looks good, so that shouldn't be a problem. Welcome to this side of the planet and I hope you have a great time. Take lots of pictures.

Remember that NYC taxi drivers can bend time and space. Just close your eyes and believe that you will survive.

be careful crossing the streets!!

I hope you have a great time! Going inside the Statue of Liberty was great fun when I went there as a kid. Now Central Park sounds more appealing. Can't wait to hear about your trip!

You can include a link to this post in your posts and comments by including the text q:143293
Agnostic does not evaluate or guarantee the accuracy of any content. Read full disclaimer.