Someday I'd like to plot out a massive road trip to visit some of y'all. I'll need a big map, loads of beef jerky, maybe 100 podcasts on the ready and tons of time! There's some I've met here who I'd love to give a big hug to! ❤ I'd need to become independently wealthy, of couse... positive thinking! Happy Sunday!

The map isn't mine, its the "Ultimate Road Trip." It'd take me a while to plot out where i want to go! 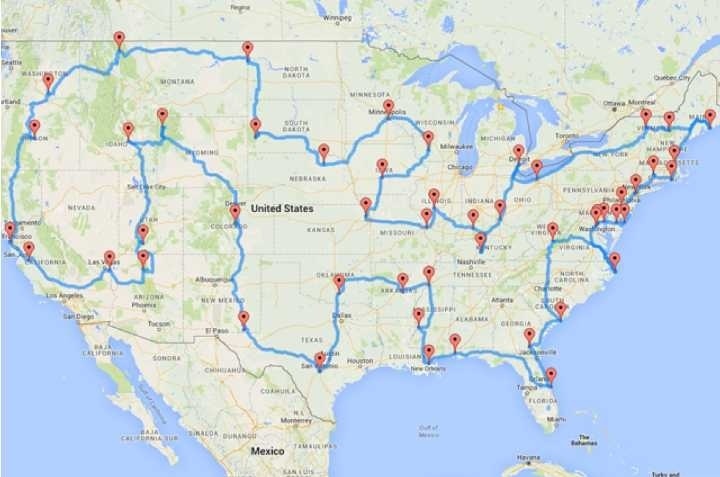 You're bypassing Hobbs, NM, too. That's okay. You wouldn't be missing much.

Second star to the left and straight on till morning.
May your dreams come true!

I will provide the cash if you drive...ha ha...I would love to meet you and so many others here...we would put Thelma and Louise to shame! Hope you get to visit the Philly area or North Carolina...I have a guest room just for visitors! Love this idea! You go!

On another blog site that I was a member of for a long time I made some great friends (kind of like it's getting here), one day tho of them decided to do just that, travel and meet people we new from the site in real life.
By the time they made it all the way down to here in Florida they were beat.
So, i told them they were welcome to stay at my place for as long as they wanted.
the first few days, we just had some wine, i cooked some good food and we ended up just talking all day long. Was a great time.

Then after every one was feeling better from being on the road for so long, we went to the beach a few times, I took them to some great places to eat.I know most of the chefs in the area, so I gave them a ring and told them I was bringing some friends, and they hooked us up.

So, in the long run it was really great to actually meet the people I've known digitally, to see them in real life.
Best part.
They were just like they were in person as they were on the site. That was cool.

So I think what you're idea of traveling to do just that is a great idea.

Ok sis, one little flaw with your map..... How are you going to start this wonderful and unforgettable trip if it does NOT goes through your own place !! ??

@pepperjones yup, shame on me. See my comment below....

You will have to come a little further south than Daytona. Come on down we will go bend a rod. Happy Sunday back at you. ?

I'm on the west coast on the gulf in Clearwater, and I've noticed that there a lot of others from Florida here as well.

Bend a rod? That's a euphemism I hadn't heard before... ?

@Lostin15801 the more the rod is bent the bigger the fish generally.

@Lostin15801, @TristanNuvo my profile pic is a nice true red I got in the gulf off of Navarre.

@pepperjones bring it on then ?

Lol, skips TN besides Memphis. Dont blame the map makers but for atheists, The Farm is a good detour. 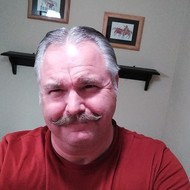 Lived in Ft. Collins for a few months when I was little, while my dad took in a summer semester during grad school at Colorado State. Such a beautiful, beautiful area.

You better come see me first I'm not that far from you.

Give a head-up when approaching Austin. We can do lunch or dinner at a local barbeque joint.

I'm not very concerned about jerky, being a mostly-vegetarian. But you should not miss the great jerky store near me in Dublin (really Wellston) Michigan.

@pepperjones It's awesome. And the sunniest place in Canada... NOWHERE near the warmest... but we get a lot of sun... Great places to hike and camp around here too.

@pepperjones I live in Alberta. Dreamy? May be some parts but in general?

@graceylou you live in Edmonton... It sucks. Lol
I went to High School there. Left as soon as I could.

@Veldoran Actually I live not too far outside of Edmonton in the country. Edmonton has improved a lot since I moved there over 20 years ago. Rural towns not so much.

@Veldoran I live just east of Tofield, if you know where that is. I like where I live on my acreage with a pond and wildlife. Can't complain.

@graceylou omg .. that's se of Ross Creek . There are some nice areas out there for sure. Well the Ross Creek I remember was an acreage and ball diamond community just off of the Yellowhead just past the Buffalo park...

Hey your route doesn't include San Diego! What's up with that? ?

@pepperjones
Silly me. I look forward to your visit!

Hit me up when you're in Philly.

I am the Gypsy of the New Spain and the New Spain was pretty vast back in the day... by the time you get here I will be somewhere else. 3 states in last month, non happy but that's life. Rock On and Party Heartly. Enjoy Your Trip Pilgrim!

I've often thought about doing a big US road trip, and it may be possible in a couple of years time. I have a good mate in Austin so I would probably start there and head north to Colorado, Wyoming, Montana then across to the PNW and back via Nevada, Arizona and New Mexico.

I know I will miss out on so much but that's about the limit of what my budget and visa would allow.

You live in Seattle. Let the road trip come to you.

@pepperjones I used to live in Portland (and have been to Seattle a couple of time). I try to get back a couple of times a year, it helps keep me sane. I'll let you know next time I'm in the area.

I you come through Utah, I can advise you. It’s probably the most scenically diverse state in the country.

Hey im all for road trips and being independently wealthy, i hope the Wealthy happens at some point lols ,if not oh well, ive been thru many western states, but not many out east or South

@pepperjones sounds cool , i think Nebraska is the most boring State ive driven thru

If you get to western ky I'll put you up for a night.

@pepperjones It's a lot of beautiful country with not much else to see.

You're more than welcome to rest here.

@pepperjones Come after Feb and we can have some red wine and a premium cigar!

Yay, a stop In Cincinnati!

@pepperjones I would amend the trip to go from Cincy to Lexington Ky before going to Louisville. It’s a fun little town.

You can include a link to this post in your posts and comments by including the text q:159163
Agnostic does not evaluate or guarantee the accuracy of any content. Read full disclaimer.