I've been visiting the local Unitarian Universalist fellowship on occasion, and went this morning. When I arrived, there was a guy - maybe 50-ish, who had parked on the shoulder, and was walking along the edge of the property, shouting at everyone as they parked - " here's rope and red hats for all you Communists and baby killers" . He did indeed have rope bundles ready to hand out.

A couple of the men went out and talked to him. They eventually had to call the police - who of course, claimed the guy had the right to free speech - but that he was not to enter the property at all. So this nutcase remained outside during the whole service, and took up berating people as they were leaving. I was on my motorcycle, so I pulled up close enough to him to try see what he was about. He was so non-stop babbling, he barely stopped to breathe, and didn't seem to hear me at all, and asked me how we kill babies ... "cut their faces off, their arms and legs - what ?" He literally had foamy spittle at the sides of his mouth from all his carrying on.

I'm hoping he doesn't return with a gun, or a bomb next time. He definitely qualifies as a bit scrambled in the head ! Oy.
The joys of being different !

Freedom of speech in public places is one thing, but when it crosses the line into abusing those coming and going from a building then the police should step in and at least say to someone like this, "You're crossing the line. You can protest, but you can't harass." Sounds like this guy was harassing.

There is no question he was.

"You can protest, but you can't harass." Depends upon the existing laws in that jurisdiction.

He wants publicity. I'd take pictures and post them. He, no doubt, bragged to his friend (s?) what he was up to. Shine a light on the cockroach.

Oh, and if he wants to be really loud and obnoxious, freon horns are, too, and they're cheap.

Think I would recruit a few others who also ride bikes very loud mufflers keep them idling just up wind from this ass-wipe.

I'd say he had a couple of screws loose.

@evergreen I think he probably only has two.

@evergreen
It does kinda burn the ocular nerves, I guess - sorry ?

It's awesome to be 100 and riding a motorcycle.

Ain't it though ? Actually, at some rallies I attended, I met some folks that had ridden lots of miles on their own, and were in their 90's. Motorcycling helps folks stay young !

This is the best way to deal. Got any musicians in your congregation?

Ridicule and drowning him out are great tools and also passive aggressive, but non-violent. Whatever deprives him of his crowd attention is a good thing.

I'm showing my age here, but he reminds me of a nutjob that became a minor celebrity back in my day by trolling college campuses to preach sin and salvation to college kids. Rev. Jed Smock and his wife Sister Cindy became such a sensation that they eventually got wrote up in Rolling Stone. Jed got much of the same reaction as this guy did here from the college kids, other times he would get pushed into a flower garden and end up on his ass. Or he might get splashed with water. Never anything really violent tho. As time went on, he became such a regular spectacle and source of entertainment at colleges, that Jed developed of a few fans similar to those of The Grateful Dead, the rock band, that called themselves Jedheads and followed him around on his college tours for his entertainment value. Ah, good times.....

What the actual heck, even unruly protesters get arrested, them cops are being lazy

technically, he was doing nothing wrong.

UU churches get targeted often by those kind of nuts, because they have the rep of being very lefty and LGBT supportive. The threat of violence is very real as a few of them have been shot up. From what I've heard, most of them now have security plans in place for that kind of problem, but none of them would ever actually have armed guards, which I think is kind of naive these days, but the churches are too hard core pacifist to take that step.

The other posters are right, calling the cops is going to be too late to save everybody if the nut has weapons or a bomb. There comes a time when a group needs to protect themselves, tho that can be hard to decide.

If he did return with a gun, it would be better to have a friend around with a gun that knows how to use it. By the time police arrive it's too late.

He is clearly mentally ill. Some observations.

regarding #3 - Exactly. Unfortunately he was "only" being obnoxious, and somewhat nutty.

The only thing that will stop a bad guy with a gun, is a good guy with a gun! #ConservativeLogic
So, ya know, shoot him before he shoots you! Take it back to the wild fucking west days! 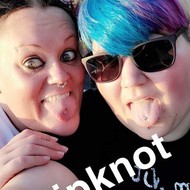 @F-IM-Forty Yes. Sarcasm. I thought it was obvious.

You should be afraid. The righteous have little or no concern for contrary opinion when they meet out their justice.

@evergreen It sounds like the police didn't want to bother themselves with arresting this man and filling in all the associated paperwork. Look at these definitions of harassment and it seems strange that the police did not know it, or weren't interested in upholding the law.

A person is guilty of harassment in the first degree when he or she intentionally and repeatedly harasses another person by following such person in or about a public place or places or by engaging in a course of conduct or by repeatedly committing acts which places such person in reasonable fear of physical injury.

A person is guilty of harassment in the second degree when, with intent to harass, annoy or alarm another person:He or she engages in a course of conduct or repeatedly commits acts which alarm or seriously annoy such other person and which serve no legitimate purpose.

Hopefully, it won't happen again but if it does, and the police are called, it might prove useful to point out these legal definitions to the policeman if they claim that this man has a right to free speech. Putting people in fear is, I think, a fairly standard offence in most civilised countries.

That was you on the bike! You should have introduced yourself. Still got some hats left if you want one

If it was me I would have rode my bike up to him, stopped and just revved it up every time he spoke.

There's an assumption that my bike is loud ... it's quite civil.

@evergreen I remember when I used to go busking (street performing). All year my friends and I would play at this underpass in the city. Then the big pay days of xmas came along and the salvation army band would set up and take all our custom. So one year we just stood and watched them whilst eating lemons. I dunno if you ever tried to play a wind instrument when someone is eating a lemon but the smell makes you salivate so hard that it all clogs up.

@evergreen In the UK its street performers but it can also be when you don't know the number and just wing it.

If he's out there again, go meditate in front of him.

I have found the more people categorize issues as B & W the more ignorant and brainwashed they are. Carrying a gun and using it is a real possibility. Don't you dare kill babies but grown-up people is all right to them.

So, how do you kill babies? You never explained that part. Personally I like to cook and eat them, but to each their own.

@dahermit That’s not what I heard. [en.m.wikipedia.org]

With cianti and fava beans.

One of the advantages to accrue when one finally cuts the umbilical and is no longer exposed to such nonsense, unless one deliberately places oneself in such a position.

You can include a link to this post in your posts and comments by including the text q:291889
Agnostic does not evaluate or guarantee the accuracy of any content. Read full disclaimer.