What is your opinion on Wiccans?

I’ve a friend that says she is Wiccan and studies witchcraft, but I can't understand why. I’d ask her directly, but we haven't been friends that long. I don't yet know if she truly believes in magic or spirits, but I’m wondering if ya’ll know anyone who does. Please share what you think. 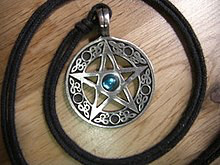 I'd much rather spend time with Wiccans/Pagans than Xtians, even with the hippie woo stuff. No Wiccan or Pagan has ever tried to convert me.

Wiccans are very peaceful and never try to convert people. One of my friends is one and she was one the nicest people I know. It's way better to care more about the Earth than to act like the world revolves around humans like Christians contend.

Yes, I know a few who are practicing Wiccans and some who refer to themselves as Pagans. My attitude is that everyone is free to pretend whatever they wish. If it poses any threat to society, then I take issue. I'd say that Wiccans and Pagans are among the least likely to create any problems for mankind.

My special lneeds daughter was born a Jew, baptized by her father and considers herself a Wiccan. I have known other Wiccans. They care about the earth.

I have been part of a Wiccan group and it envolved rituals, but no one in that group was into magic. It shows homage to nature, in all things! Maybe other groups have different experiences? That is the only one that I know about!

I tried it. It was bullshit.

Some of my friends are Wiccan . As I understand it , there's no magic involved . They worship nature . For instance , they often have an interest in herbs . Herbs , were used in healing remedies , long before the big pharma companies began making expensive non-curing drugs , and selling them at outragious prices . The term witch , originally ment wize woman . IE. a woman who studied the healing powers of herbs , could help those who needed help . Then , of course , there were those who , even though helped by herbs , chose to make something evil of the person who helped them .

Just another religion fumbling in the darkness of delusional beliefs.

Faith (belief without evidence) based Wiccans are just another religion. Although, I do find Wikkins much less offensive then Abrahamic religions as they seem to celebrate nature and are not your typical (Christian) variety death cult. My college’s room-mate was a hard core Christian. His sister was (I think she identified as a Wiccan or just a witch), and was a member of a tiny coven. They shared an apartment with a wizard and another gray witch. One night they invited us over to eat. They had a pentagram on the floor, cool candles (unlike the phallic looking candles the Catholics use) these looked like something from a Dungeons and Dragons paraphernalia. They talked about casting spells (their version of Christian prayers) and other (supernatural) activities. I found them no more deranged than any other superstitious cult like Catholicism. Overall, I have never met an unpleasant Wiccan. I also knew a very pleasant woman who was a Wiccan. She was kind enough to include me in a one of their seasonal celebration/ceremonies. I found this fantastical. As to why study (participate in) witchcraft? Based on my single experience in a celebration, it was very much like playing Dungeons and Dragons: somewhat like reading a good fictional book, but interactive as it is first person escapism where you are free to form and imagine a world not defined by reality. (Again, sounds like Catholicism) Although most Wiccans appear to actually believe in the supernatural, I could not imagine actually believing their religion was anything more then fantasy. Unlike Christianity, As I did not see Wiccans beliefs having adverse consequences for our society so I did not attack their “faith” based belief system.

I knew one! She did have special powers. She cast a spell on me and made me a sad, lonely and bitter man. It took over a month to break that spell.

Good folks with to many rules and regulations. I am a witch by birth.

Just another form of religion!

It would be sorta neat if the spells actually worked.

They are usually nice people who need something to believe. Obviously, they can be pretty vacuous, but they are far less obnoxious and self-righteous as a lot of other religious people.

Just some more bullshit but its up to them

More benign than most religions. They aren't going to body tackle a kid to force them to adhere to the "doctrine." But...Still bullshit.

Humans fear the unknown future and wish to exert control over life. They perform rituals or pray to keep bad things from happening. That's basically trying to control the world. We should know that it's ok if we don't know what will happen tomorrow. Nothing is in control and that's ok

I think they are wicked!

I have never met or known any but I would imagine they are no different than most everyone else with their own beliefs. I would imagine that you and I would never understand why anyone would believe anything with no evidence, facts or data to support it.

Here in N.Ga, most of those members were in an active peace group, too! That was 25 yrs ago.

Its a funny cult... the person who practices it are supposed to be at one with nature. That sounds good. But the witchcraft?? Go figure..

I have a fondness for Wiccan. They're a lot more accepting of atheists than the monotheistic religions are. Jews aren't so bad though.

I think Doublas Adams had Wiccans in mind when he came up with the description of Earth as being "Mostly harmless."

I just checked your profile...I am an INFJ

I consider them less annoying than others with stupid beliefs, but they’re still kooks.

You can include a link to this post in your posts and comments by including the text q:34576
Agnostic does not evaluate or guarantee the accuracy of any content. Read full disclaimer.