We rely on members to let us know when posts contain content that violiate the community guidelines. The most common reason that content gets flagged is that it contains dehumanizing or trolling/baiting text. Getting too many flagged posts will result in account termination.
5 4

A Montana state lawmaker just told a roomful of Republicans that the Constitution says socialists can be jailed or shot - simply for being socialists.

Wow, who knew the Constitution advocates shooting socialists? Oh wait, now I remember. That’s in Article 2020-BS, which also permits the shooting of reporters, Democrats, minorities, ”uppity" women, folks who aren’t born-again Christians and those who speak out in opposition to President Trump.

But gee, a prominent Republican is actually justifying the murder political opponents? Of course, I’m sure Alan Dershowitz would say it’s perfectly fine, just as long as it’s your “sincere belief” shooting socialists is in the best interests of Montana.

Now, I’m certainly no legal scholar, but I’m pretty sure the Constitution warned that this is exactly the type of person who gets elected - when too many residents breed with farm animals. 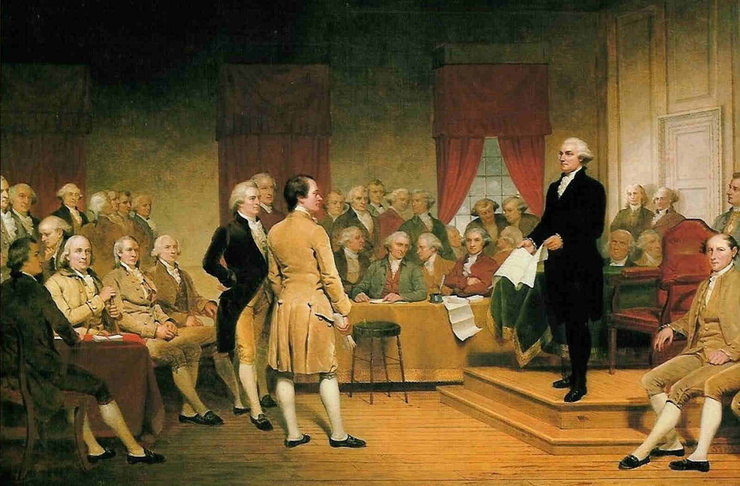 You left out the part requiring silver bullets for non-Christians, to ensure we stay dead.

Hearing all week"best for the country" during impeachment
, reminds me of other DESPERATE world leaders who went
down in flames. Another history from here- Vetrans who
had to riot before they got thier years of back pay- could these also profess socialism(?). Git rid of overtime, and just
plain shut the gov. down ,we really do not need clean water
any way(gulp). I suggest carving up ALL labor laws; we
will dance a CORPORATE jig all the way to the bank.
Paine was is and will be someone to do the right thing ;
not so much the EASY action.Socialism? So be it.

I know that conservatives don't look to highly on Thomas Paine but this entry from the Thomas Paine National Historical Association states:

Was Thomas Paine a socialist?

If by "socialist" we mean a state-supported welfare system to ensure the poor and working poor lead comfortable lives, then yes. Paine supported a social welfare state. If by "socialist" we mean that wealth is produced by the working classes (in his day the farmers and the mechanics) and that they should reap the benefits of that wealth, then yes as well. (Paine had a labor-theory of value). But if by "socialist" we mean the definition it was to gain some 20-30 years after his death, ie. that the working classes control the means of production through the state, then probably not. Those ideas and even the language around them had not come into use during Paine's lifetime. In his era capitalist forces were just taking shape, and he did not foresee some aspects of that. In reference to "socialism" in that light, he would have no clear grasp of the issues involved. He did support the program of Babeuf in the French Revolution, but opposed his methods. (The word "communism" was coined by Goodwyn Barmby in a conversation with those he described as the "disciples of Babeuf".) So all in all, he seems to have supported, and advocated for, many of the tenets of what people later referred to as "socialism." Paine was a theoretical precursor to socialist theory, as Edmund Burke was a precursor to conservative theory. The theoretical foundation of Paine's political thought was "equality", while Burke's foundation was "order."

Paine had many good ideas. He still wasn't much of a people person; Jefferson kept the French from chopping off his head during their revolution.

@Beowulfsfriend The fact that he wasn't a people person only increases my respect for him.

Bullshit recent invention why are they always so stupid

Every day its something new and more disgusting with this crowd.

Stupidity is one of their defining characteristics.

Last I checked, socialism didn't exist when the Constitution was written.