Does this bother you? 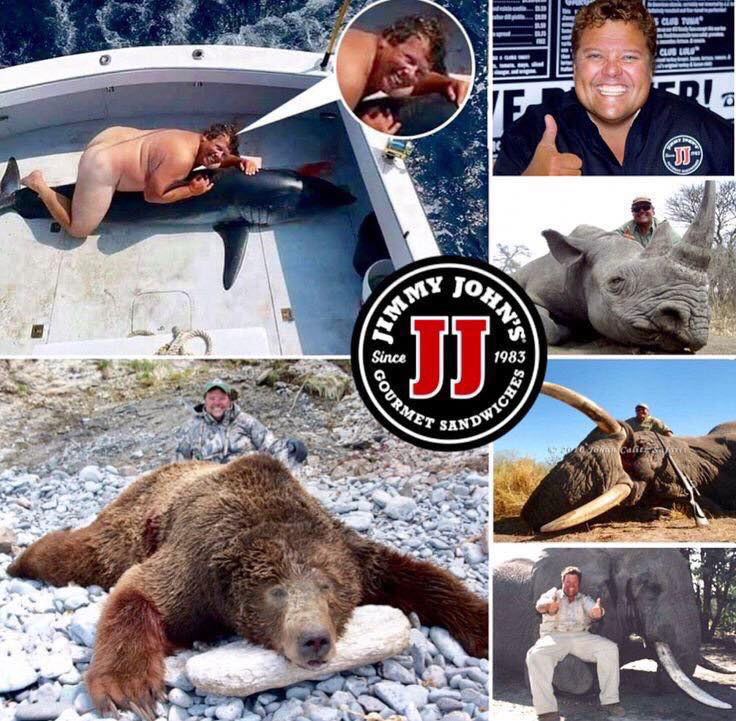 YES! I've boycotted JJ's now for about two years because of it. I'm sure my little one person boycott won't do much but it's the principle of it.

I've been boycotting it too. You're not alone.

I vote with my paycheck, I also boycott Walmart, HobbyLobby and Chick Fil A. There may be a few others....

@GreenAtheist I don't eat pizza most of the time, but I will keep it in mind.

Personally I no longer patronize Jimmy John's. I will not support big game slaughter. And really, the ass on the man in the upper left picture just forever killed my appetite for that product.

I used to love JJs until came across this. There are other places to get subs that do the job.

@ThatpersonIam Yes, sadly he is. I loved JJ's, they make a bread free sandwich (I was low carbing at the time). I haven't eaten there since I first found out about his "hobby". And now seeing his ass, what an ego!

It bothers on enough levels that I need at least an escalator.

I have to remember that phrase, love it!!

Doesn't really bother me; jeezus, we have a Cretin in the WH whose children are as bad, or worse. I would, however, like to shove a hand grenade up that guy's ass and pull the pin.

The Cretin has made importing elephant trophies legal again..

Like Japanese whaling and other senseless killing, I have spent much of my life opposing this sort of thing. I think what I find most disturbing is the people that get a thrill out of it.
Unlike most, I do not value humans any higher than other mammals, so to me the logical extension of thrill killing of animals would be thrill killing of people. And there are plenty that do,

It bothers me Intensely...

I hunted for food much of my life. I don't ever remember posing with such irreverence. I would always thank the animal, and rarely pose, and if I did I was grateful. This guy seems to have no respect.

Herd management (a good thing) often involves granting hunting "tickets" to a certain number of people. If you're going to eat the meat, or donate it, then I'm good with game meats like bear, elk, deer, etc. I don't know enough about big game hunting to comment. But it does look like this guy is just being a knob.

I don't know the location, but elk and moose were constantly stripping away the wild grasses and reeds from a section of river, leaving it bare. It led to soil erosion and affected the local fish habitat. So they upped the number of hunting tickets and introduced wolves in the area. By REALLY thinning the heard, vegetation came back and in a few years the area was a thriving ecosystem once again.

That is necessary to keep the cycle of life healthy. Hunting for the thrill of the kill is not a sport in my book.

@Betty - I think your reply is self-contradictory. Correct me if I'm wrong, but did you mean to say that hunting for the thrill of the kill (which by definition is for sport) is wrong?

Or more simply asked: How is hunting for the thrill of the kill not a sport?

Culling a herd because of overpopulation is necessary to prevent starvation. I agree with you on that point as humans have taken over natural habitats and removed natural predators. I understand they have re-introduced timber wolves to Yellowstone to balance the wildlife there.

As for trophy hunters, in my opinion, the use of a high powered rifle with a scope aimed from a safe distant on an unsuspecting animal is murder, not a sport. The animal doesn't stand a chance.

In some countries big game hunting is also a buy a ticket (a very expensive ticket mind you, and the local tribe gets the carcass after the hunter takes his trophy/ photos/whatever) and shoot the animal we tell you to affair. It is one of the ways they convince the tribesmen that conservation is in their best interests (the tribe gets a cut of the ticket price) because for the very poor an animal that destroys your crop in one night is toast unless there is a very good reason to let it slide.
Why anybody would want to buy that ticket is of course beyond me.

Hunting for food which I have done and many do is just fine. For sport, absolutely not. There is no sense in it.

Yes it bothers me and I don't ever eat there.

more than you could imagine

I've no problem with hunting. It's necessary to keep animal populations under control since we humans have mostly eliminated the predators that would be doing that. However, hunting endangered animals, and hunting for sport generally, is really not cool.

I agree, on both counts.
My eastern KY farm was overrun with white tail deer because I don't hunt.

I didn't mind, until the buggers began joining me on my jogs, frisking around me like playful dogs, and the last straw was when I turned around during a hike and saw a large buck was the last animal in line, behind my five dogs.

I bellowed at my startled (rescue) yellow cur dog, Brownie, "SIC EM!"
After a short pause, as though checking to see if I was serious, Brownie turned and galloped after the buck, who also turned and began bounding into the air while running away.

I was impressed, until I noticed that the deer's bounds weren't taking him anywhere, and that Brownie, though seeming to gallop, also wasn't going any faster than a walk.

I gave them both a lecture, but later on, I happened to look out the window at dusk and saw the horses, mule, dogs, and wild deer all together in the pasture, playing tag, leaping around playfully.

Then, I saw a deer standing on its hind legs stripping my small pear tree of its new crop.

I was so angry, I invited my redneck hunter neighbor to hunt deer on my farm, but he never was able to shoot a thing.

@birdingnut Animals living in harmony, that sounds nice. Except for the munching of the pears part. Maybe you should booby trap your orchard. Get you some venison.

@RoboGraham That was my hope, even though I gave up eating most meat when I was in my 20s, but I might make an exception for delicious venison.

The neighbor never got anything, but my brother, who lives in Alaska, sent us a package of frozen caribou sausage from his hunting efforts (He flies a bush plane, so is able to shoot them, and pack them home)..MMMMMMMMMMMM!

The elephant and rhino yes no reason this guy seem to have done this for sport which is senseless. When it is done as a means of survival it does not bother me. I know lots of families in back woods areas of Pennsylvania that go deer hunting and stack the freezer. It helps with the food bill some.

I don't support killing anything for the fun of it . Never seen a bear that big before . Must have had a time & a 1/2 getting it out of the area , or did he just let it rot ? 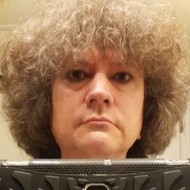 Yes it does. I am an outdoors, in nature person and I have never hunted nor killed for any pleasure nor do I understand how others do. There is a Native proverb, "Until the lion can speak, you will only hear the hunter's story."

In my opinion, anyone who would kill an elephant or a rhino bothers me. I think that's just weak. If someone wants to go out there and take on a rhino with a sharp stick, go for it. That might actually prove something about your manhood. But going out and purchasing a high power rifle with an equally expensive optical sight and then riding out on a land rover and shooting it into the vital organs of an unsuspecting elephant is just cowardly and selfish. Seems to me it takes a special type of numskull to waste the kind of resources necessary to go and do that. Not to mention the fact that the act itself is just pointless.

The bear or the bare?

@HippieChick58 all of its pretty unbearable!

everything related to the senseless maiming, torturing or killing of animals makes me despair of our species. it hurts me, it outrages me, i despise every person ever considering it smart or heroic or whatever to commit such atrocities. i would shoot those bastards without flinging, were it not illegal.

Trophy hunting is disgusting. I only wish the bear knew how to use a gun..

You can include a link to this post in your posts and comments by including the text q:19518
Agnostic does not evaluate or guarantee the accuracy of any content. Read full disclaimer.