Who has read the comments on Agnostic.com's facebook ad?

Agnostic.com's facebook ad came scrolling through my feed so I clicked on the comments. Wow!! Mostly christains talking mad smack about the site and about us. Quoting bible verses, being judgemental, spouting hate...you know, christian behavior.

The terrified, hateful comments actually made me think that I needed to look into this site. I wondered if people commenting there were the opposite of the ones on Agnostic. If so, I thought I I might have found my cyber-tribe.

I didn't read the comments, but found this site through the Facebook ad, too. And glad I did. I've been spending more time on Instagram than Facebook, but there's no discussion there, really. I don't want to clean house on every negative Nelly there, i want to stay aware of how other people think. But it's gotten to the point that I have to take it in doses. So far, this place has been pretty great.

@Tampabrew I was staying aware through Facebook, as well. I have suffered a kind of burn out there, with what is going on in the world these days. This place has become a happy change of pace.

@LB67 I couldn't agree more. Only thing missing is the lot of my friends that I do enjoy keeping up with. I guess I'll have to go out after work more now.

Pretty much all FB is good for anymore is a forum for trolls.

Me. They are always good for a laugh!

I wanted to crawl into a vault of protection after I last read comments. However sometimes I see nice comments from people who are here - or from people who think it might be a good place to join.

I don't like knowing that much of the population is that intolerant and hate filled - but at least I know. And not everyone is.

I should have a few thousand extra points for defending the site and agnostics/atheists on those threads but I don't care about points lol... Yeah, lots of stupid repetitive comments...

Yep there's a lot of dummies in the world

I also didn't know about Agnostic.com until a FB ad scrolled past. Figured I'd give it a look. And like others here, I'm glad I did.

I love that Christians will tell me my sins have already been absolved by Jesus' matyrdom on the cross, and that the Good Book tells deep truths and quote those truths at you. But then they turn bat shit crazy when, apparently, you infringe on the intellectual property of the Good Book (I'm fairly sure the authors died more than 50 years ago, so I think we're in the clear) by quoting it outside of church and street corner preaching. I find the intellectual vacuity of these people both baffling and bemusing.

I leave it to Tim Minchin...

I'm not on FB that often. i only check in there sometimes to say Hi to some old friends. But one time i was there and an add was in my feed from this place. I just had to check it out, and I am really glad i did.

i didn't know there were comments to read on the ad.
I'll have to look that up and read some. I'm always up for a good laugh.

I went there to the FB site, and read a bunch of comments. It is always funny at just un-christian are so not Christ like.

I found this site from the Facebook ad. I didn't bother reading any comments. Now I'm curious.

Unbelievably, I used to argue with Trump trolls and even insult them back. I guess I needed to vent some of my frustration after the 2016 election. Eventually, I began thinking of them as mindless ants, churning around and attacking anything they perceive as different, so their opinions no longer meant anything to me.

I recently found out that THREE of my college educated, professional siblings are Trumpites, and act just like all the other alt-right wing nuts if I say anything about what Trump is doing..it's all "fake news" - thank heavens Obama is gone, so now we have a "real" president," etc.

So I dropped my siblings from my life, as I can't imagine hanging with people who think it's a good idea to take kids away from their parents and lock them into cages, to attack the rights of LGBTQ people and minorities, or to collude with Russia.

I have been surprised and appalled at the people I know who voted for Trump. That tells me I have a lot to understand about my fellow countrymen/women.

Since I've joined this site, I no longer see the ads on Facebook.
I may have blocked the ads, I don't remember. It's quite likely though.
I do that. If it's an ad, I usually block it, regardless of the source.
I "hide" a lot of posts, too.
If I don't want to see it every time I check my feed, I'll hide it.
Or snooze the source. I do that a lot, too.
Or just unfriend, or unfollow, altogether.

Me! and I want to reply to them....but I'm afraid people in here are watching and then would try to friend me on Facebook. So I don't comment. LOL

good on them! whilst they are talking about us they are leaving other good folk alone !

On my Face Book I have a film of myself playing guitar and singing. while wearing my Agnostic.com shirt. I got a lot of good comments, and one friend wanted to share it. I told her to go ahead. But this one friend did want to know what was up with the shirt,. I also read a comment from one of our members, letting everyone know that is was a great site.

No but I will take a look. I can only imagine the nonsense and verbal diaharia they are probably spouting...???

So you happen to have a link. Would love to take a look.

Yes, we've talked about this a few times but it is always a great reminder of so-called Xian love. LOL I read some of the comments a few times and was actually kinda scared! It actually was a FB ad that brought me here, but I hadn't read the comments until later. Yikes!

Imbeciles are everywhere. And what are the afraid of? Why are they "offended?"

I figger, it is another symptom of their mental confusion.

So much for "Love thy neighbor as thyself". If these people can quote supposed bible verses to back them up it tells me this book is one of contradictions and this is just one of many examples.

I read them to see where their thoughts are because many of these haters worship the man in our White House. I had been on the verge of ignoring them all until a friend pointed out the need to know their thoughts in the months ahead. There’s no trusting them I feel. They want dictatorship so they can wipe us out and impose their beliefs on this nation. Perhaps I sound paranoid and I sincerely hope I’m wrong but I feel like we need to be ready for anything. 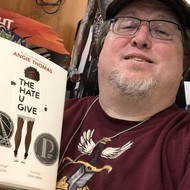 I don’t have cable tv. 24 hour news is not good for our health.

I agree. If we don't stand up and fight against the insanity of Xtuns, religion will take over.

I haven't seen them, mostly because I don't hang out on FB all that much. I probably wouldn't bother responding to them. The Internet is full of goofs. Personally I try to not get drawn in by trolls (though I have failed here and there). I do my best to make sure that I am passing along correct information that is not inflammatory. In short, I try to keep the high road and let them make fools of themselves.

humans are self centred idiots to a >< degree who knew

You can include a link to this post in your posts and comments by including the text q:143791
Agnostic does not evaluate or guarantee the accuracy of any content. Read full disclaimer.